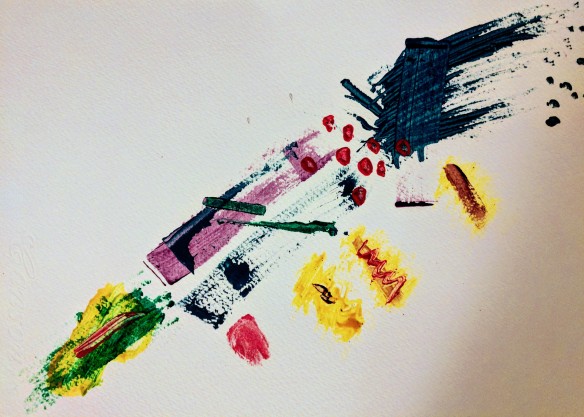 They said: “…to expand and explore our creative vocabulary…”
They said: “… art is just a series of marks, one after another…”

And so I began … It was intimidating to think outside the box … to push myself not to paint an object like a shoe, or a vase of flowers.  I can’t paint or draw anyway, so I’m better off steering away from what would only be a poor representation of such an object.

Sitting beside me, I have a real artist, who has decided to sketch with charcoal, and stroke with her finger the facial features in gold paint … it is Brilliant! with a capital B!… like Aghhh ‘NO  PRESSURE’ to perform at all!  I really wanted to just go and sit somewhere separate, by myself, where I was not at risk of anyone’s thoughts, or even worse, actual comments.  But I stayed in my seat, and I decided on abstract.  That takes away some of the pressure of it … to have to look like any particular thing … because it is no particular thing.  It is it’s own thing.

But I was still stuck at: how to, what with, and where to make my first mark on the page.  I knew I wanted bright and colourful.  And so I started with a paint palette, squeezing out the colours that appealed to me.

Finally I decided to just make a mark, any mark, top right, in blue, with a wooden slider thingy… Ugh! … it didn’t really give the result I was wanting … so my next move was to pick up a twig and scrape out the paint further right.  Hmm … kind of what I had in mind, but not really.

So I decided to leave that for a bit, maybe that will develop further later … but in the meantime I’ll explore a new colour … and so enter purple!  Then red … as I explored dots using the end of a twig.  Then some more blue, parallel with the purple. And back to the red dots to enhance those from earlier, as well as adding in more red dots.  Then back to the blue … with some blue dots.  I’m having a very ‘dotty’ old time … but with no idea of what I’m creating, where it’s heading, or how it’s going to look in the end.  But it’s growing … into something? … and I’m actually starting to enjoy the ‘unknown’ of it all, the freedom to just do whatever, and see what happens!

So then let’s try some yellow, each of the 3 with something different, a brush stroke, a squiggle with a twig, and another kind of twig impression that didn’t work, so I squiggled with a twig again.  A finger print in red … my one and only unique mark contributed by the fourth finger of my right hand.  Then something extra was needed bottom left … more yellow, then green on top.  How about some green in the middle … something in the opposite direction to the blue and purple … exploring different sides of the wooden slider thingy.  Then a bit of red in with the yellow and green.  And that was where it finished.  Or at least I figured it was finished? As I didn’t know, with the tools I had, what else I could add to it.  But what is it? I don’t know?  Other than to say:  “Its just like they said it would be . . . a series of marks one after another, that were impressed on the page, as I allowed my creative vocabulary to open up to explore the possibilities of what I could do, using the tools available to me.”

And so it can be with life:

Intimidating to be your own version of you, not conforming to the norm . . . but to live outside of that box.  Not to pursue the ‘usual’ things of this world, but instead the abstract.  Not that there’s anything wrong with ‘usual’ except when ‘usual’ is not a true expression of you.

To recognise what you can and cant do in your own ability, but still being able to allow yourself to be open to expand and explore the possibilities out there.  Dont be a ‘piece’ poor (accidental pun, but it works) representation of someone else, but be the true original ‘piece’ you were designed to be.  There will always be other ‘pieces’ around you, but dont compare, as we are all unique in the ‘art exhibition’ that is life.

There is no pressure to perform, no reason to hide.  So make the choice to stay, and do your own thing.  Dont get stuck on the ‘how what and where’ … take that first step, use what’s available to you, and make a mark, something, anything, somewhere, anywhere on the page.

Some marks will turn out as you expect, and others not.  As you explore and expand, with ‘twigs and brushes and wooden slider thingys’, you’re all the time ‘adding on’ to a journey of  discovery and learning.  Maybe with no idea of what you’re building, or where it’s heading, or even how it’s going to look in the end … but you can see it’s growing … into something?  You’ve just got to trust the process, the process of artistic expression, as you continue to make one mark after another on the page that is your life … and most importantly, have fun doing it!

They said: “…art is the creative expression of leaving your mark … whatever that may look like, be it in writing, in song, in paint, or whatever be your talent.”
I believe this also includes that which has been entrusted to you, for the person that you are.  Maybe you’re not artistic in the usual interpretation of the word.  But you are just as much leaving ‘a mark’ when your life expression is lived out of who you are as a stay at home parent, as an employee in your work place, as a single person, whatever your situation may be.

So go on, show the world … What is your mark?

2 thoughts on “It all starts with a single mark…”