A few months ago I was driving along Mt Alexander road in the right hand lane. The traffic ahead had stopped as they were turning right, but were giving way to oncoming traffic.  I was going straight ahead and so I indicated and moved across to my left hand lane.  As I drove past the line of stationary traffic on my right, there was a ‘suddenly’ moment when a vehicle pulled out and connected with the front side panel of my car … at which time the right lane traffic must have started to move … as ‘we’ (me and my new unwanted accessory) moved through the intersection like we were ‘one’ vehicle.  I had nowhere to move left away from her, as we were ‘one’ vehicle, 2 cars wide, and in my lane . . . so as we’re moving together, I’m glaring at her through my window, literally screaming at her “GET  OFF  OF  ME!!!!”   She ‘eventually’ moved right … back into her own lane … and then we were able to pull over.

We exchanged license, phone no, address and car details, took photos, and went our separate ways.  We were both insured, and she admitted fault.  Her car was barely damaged other than some minor scratches on the side from where we were connected.  I still don’t understand how her passenger corner wasn’t damaged given the damage it did to my ‘Buka’ (Book-ah-ta! Zambian, meaning ‘gift from God’).

As I drove away I asked God, (rather agessively) “Why? Why did we have to collide like that?”  I had been on my way to a voice lesson, driving in my lane, and then suddenly, either she didn’t look, or when she looked I was in her blind spot, and now as a result, this has happened.  What is the purpose in this?  Why?!?!?!? God! Why????

That evening, (let’s call her) … ‘Mary’ called to say that she had called her insurer and learnt that she had missed her last insurance payment … thus she is uninsured.  So I contacted my insurer, giving Mary’s details so they could process the claim directly to her.  The process thereafter was quite frustrating.  My insurer advised me there was nothing closer to home, and so sent me to a smash repairer 30 minutes away, and nowhere near public transport.  I didn’t know how I was going to work this out, but I went ahead and got the quote anyway.  Then the guy doing my quote advised me of repair centres much closer to home.  Frustrated by the differing information … he then amplified that with the words “Given the age of the car, we may well just ‘write it off’ as not worth repairing.”   Now I’m frustrated and distressed!  This is Buka we are talking about here!  You can’t just write her off!  She is my gift from God, and even if she wasnt I’m not in a financial position to buy a new car, and the idea of going on the second hand search again was somewhat daunting.  “Ahhh! ! !  Why God? Why? ? ? ”  Then a few days later, the quote came back as repairable. So that was a major relief.   “Thankyou God!”

So then I began my own research, and found a smash repair centre that was close to home and with good customer reviews, so my insurer transferred my claim to them.  Making more work for myself . . . I then had to organise getting a quote done by this repairer.  Then it was about organising a date for the repairs to be done . . . which they said would take a week.  Then it was Easter holidays.  Then it was Anzac Day public holiday.  Working around their opening hours and my nursing roster, I finally worked out a day I could drop Buka off at the smash repairers . . . they could have her from Wednesday to Wednesday.  But then I realised that was a really busy week … I needed a car Wednesday night, Thursday night, Saturday, and always on a Sunday.  Public transport was not viable.  Organising lifts with people too complicated.  Hiring a rental was going to be expensive, and given this is an uninsured claim, I would have to pay the cost up front, and maybe I’d get it back on a payment plan from Mary, somewhere in the future.  But I didn’t want her to incur that added expense either.  Uber?  I used their quote app and that was going to be just as expensive as hiring a rental.  So I changed my plan.  I negotiated a shift change with a work colleague, and booked Buka in on a quieter week for the following Monday to Friday.  Hopefully that’s all it takes.

So on that Monday morning I dropped Buka off at the smash repair centre for her repairs . . . but instead I was advised that they’ll do a wheel alignment and a mechanical check first to make sure it’s all good to go ahead, and when they’ll be able to start those repairs.  Now I know I’m not a mechanic, but I thought those things would have been established on doing the quote?  But apparently not!  While waiting for that report … I felt like I was right back at the start again … revisiting the whole question of whether ‘Buka’ would be written off or not . . .  Is she repairable . . . ?  They said she was . . . !  It was looking good . . . ?  But now they think there’s a chance there may be more damage than first thought . . . !  So will she now be deemed unrepairable based on what they find on further investigation . . . ?  “Why  God?  Why?”

It was 2 days later … once up on the hoist, Buka was found to have some ‘structural damage’  … a bent wheel strutt on the right.  In that moment I wondered “What does that mean?  The damage IS definitely worse than first thought!   Does this mean she’s now ‘deemed’ not worth repairing after all?  “Why  God!  Why?”  But apparently not! … She still comes in as repairable.  What a relief! “Thankyou God!”

But it does increase the time they need to have Buka in the ‘workshop’ to be able to complete the repairs.   And so it was, Buka was out of action for 9 days in total.  And when I picked her up . . . Buka was looking great!  No sign of where the damage had been done.  No more of that clunking noise every time I opened my door and the two damaged panels collided.  Fully repaired and running like she should. 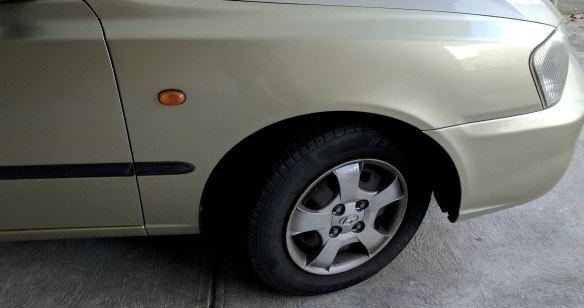 Life!!!!
Why do we have to collide with situations and circumstances that bring challenges causing frustration and distress?  Sometimes it’s our own doing … or ‘undoing’ you might say.  And sometimes it’s not.

From Mary’s perspective:
We all make mistakes.  We all have blind spots.   We can’t avoid/prevent what we didn’t see. That’s why it’s called a blind spot . . . because we are blinded to it, or by it.
From my perspective:
I was in my lane, following the road rules, then bang!   Thanks for the inconvenience and the turmoil to my life.

And … so it is in life!…
Life is staggered with ‘stuff’ …  inconveniences and challenges … but without them, where would our growth come from?   Sometimes the situation or circumstance is repairable, and sometimes it’s not.

As it was with Buka:

But that wasn’t how the situation played out . . . and all the ‘wishing’ it didn’t happen wasn’t going to change that.  If only she hadn’t pulled out of her lane.  What if I hadn’t changed lanes.  So that same afternoon I made the decision to find ‘some good’ out of this saga . . . and if I couldn’t find it . . . then I would make some good.  However, due to the nature of the incident I decided to wait until the repairs on Buka were all done.  For whatever reason, I feared any communication with Mary before that time, might jeopardise my repairs.  So once the repairs were done, I followed up on that ‘make some good’ and I sent Mary a card in the mail to say “Thankyou” (for admitting her fault and accepting responsibility) with a little gift of ‘encouragement’ inside.  I don’t say this to boast, (at least I got it ‘right’ THIS time, or I think so?), but rather to show that I could see it from her perspective.  I had to acknowledge that.  I wanted to acknowledge that.  Even though I knew it was an accident … thus unintentional … I guess it was for me an act of forgiveness for the inconvenience.   And maybe for Mary it gave her some ‘relief’ as well . . . because at the time of the accident when we exchanged our details, I was trembling like a leaf on a very windy day, caught up in my own trauma of the situation.  But on later reflection, I remembered Mary’s demeanour, I recognised and interpreted that ‘look’ in her eyes that said to me that she was struggling with more than just this accident.

I’m sure we’ve all been in life situations (not just on the road) where we’ve had a blind spot, looked and not seen something we should have, or just didn’t even take the time to look, see, hear or listen properly.  Then in hind sight we’ve regretted (and maybe even berated ourselves) for not having looked, seen, heard or listened properly.

In every situation and encounter:

and in listening … to truly hear.

And so I concluded that while I can’t ‘fix’ Mary’s internal struggle, I can do what I can to ‘make some good’ in this situation in which we collided … and who knows the impact of , and where that piece of ‘good’ will take Mary on her journey …

And a quote I like by an unknown author:
Everyone you meet is fighting a battle you know nothing about. Be kind always.

So be kind and sensitive to those in your world today … especially those with who you collide!  Because maybe they need your ‘kindness and sensitivity’ the most…